With it's early maturity date this is by far the best green bell pepper we have found for the home garden.
Thick walled 4 inch bell peppers are produced on a stocky plant.
Pepper will turn from green to red if the growing season is long enough.

At last an early maturing sweet red bell pepper.
Long 5" peppers on a bushy plant that will set under the less than ideal conditions we often experience in Alberta.
Very sweet, long shelf life and high disease resistance make this a must for all pepper lovers.

Sweet Italian Pepper that turns from green to red.
Horn shaped peppers grow on a short 24" tall plant.
Can be grown in a container or the garden.

Tapered peppers about 4.5" long grow on 24" plants.
Prolific producer of yellow peppers that turn orange and finally red as they mature.
Great mild taste for salads and frying. 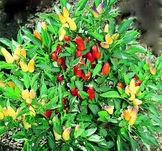 The name says it all.  It's equal parts ornamental and edible!  Compact plants bear lots of multi-coloured, sweet and mild peppers.  Extrememly prolific. 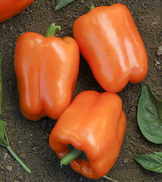 Orange Blaze  (65 to 70 days) The brightest bell on the block is Orange Blaze Hybrid, a crunchy-sweet pepper with early maturity, great disease resistance, and delectable flavor. Awarded an All-America Selection (AAS) for 2011, it is your best choice for fresh peppers all season long!  They can be picked green if need be, but their best flavor and most vitamins occur in the final days of ripening, when the peppers abruptly turn from deep green to bright orange.

This variety is the hottest jalapeno on the market today
Vigorous plants produce lots of extra long 4" peppers over a long season.

Thin long 5"  fruit matures from green to red.
Can be used fresh, but is generally picked at season's end and dried.

A Chili Pepper bred for increased yield as well as ornamental appeal making them ideal for containers on the deck.
The 2.5" cone shaped peppers stick up out of the bushy compact plant.
Peppers turn from green to orange and then finally red.
Can be used fresh or dried

Apache  (90 days)                              Heat Rating - 80,000 Scoville Units
Apache, with its compact habit, is ideal for pots and containers as well as on a warm sunny windowsill.  It requires very little support - in fact, a mixed container with some complimentary flowers will be sufficient.  Apache produces a heavy crop of 2-3inch green peppers that mature to bright red all over the plant.

The hottest pepper we carry!!
Small wrinkly lantern shaped fruit (1.5" -2") matures from green to light  orange.
Watch out when you harvest these, it's wise to wear gloves, they will burn you!!

Peppers like it warm, and do not establish well, grow or set fruit when temperatures are below 12 degrees C.
You should plant peppers about a week later than tomatoes.
It is often beneficial to plant next to a building as this helps boost night temperatures.
Peppers are not as heavy a feeder as tomatoes. Using lower doses of fertilizer more frequently will give optimum results.
Fertilizers with high nitrogen will often results in lots of green leafy growth and less peppers.
A fertilizer like 5 - 10 - 10 will give the best results.